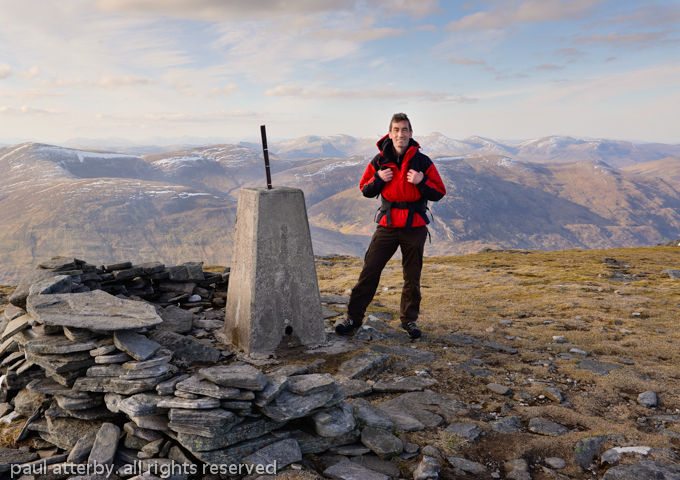 Whenever I leave Scotland, I feel a part of me is left behind. That same feeling was present the January day I descended from Toll Greagach after an ascent in very poor conditions. From the summit I had glimpsed the view of the surrounding mountains and that was indelibly imprinted in my mind. I vowed to return.
So it was, I returned in May to start my 2nd attempt at 0230 on a Tuesday morning, with a forecast of "sunshine from the start" The dry conditions turned to drizzle and by the halfway mark, I was walking in wind driven horizontal hail and by the summit, snow! I couldn't see anything of the surrounding mountains, visibility was probably about 100 yards. At the summit trig point there is a low stone wall of a few feet depth and I lay down behind it to shelter from the wind whilst eating my sandwiches. With no sign of the weather easing I began to descend back down. As the conditions improved a potential composition presented and I fastened the camera to my tripod, whereupon a gust of wind blew my camera bag over the edge of the mountain! My eyes followed it to where it appeared to stop. With the camera and tripod tucked under a rock, the bag was retrieved and I unfastened it from my waist as a further gust blew it down a second time. The air was blue! Luckily it was fastened up and the contents were safe. A second rescue attempt was made!
With the memories of Tuesday dulled by time, I returned on the Friday to glorious conditions, memorable for the right reasons!