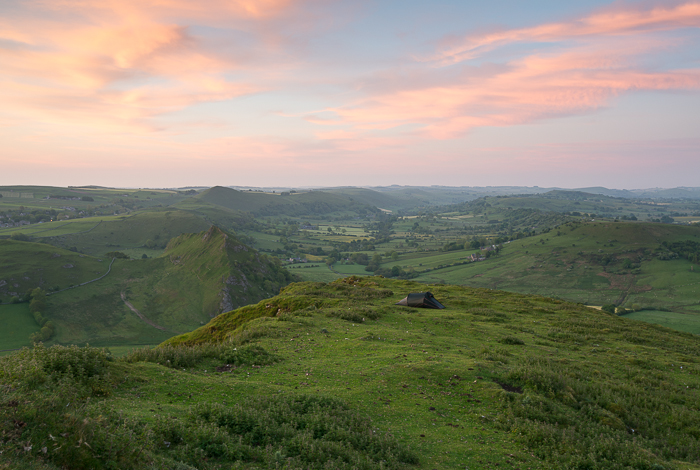 Wild camping as an aid to landscape photography has been a seed in my mind for some years and as we know, seeds grow.
In September, I felt committed enough to buy a Lightwave G20 Ultra tent and all the other essentials for a night or two under canvas.
After the initial obligatory trial in the back garden, I have made the following forays.

September 2014. Summit of Glaramara in the Lake District. Too hazy for photography!

October 2014. Just below the summit of Sgurr na Lapaich in the Scottish Highlands. The evening was clear and my plan was to photograph from the summit at first light. I awoke to low cloud and visibility of 50-100 meters. No pictures!

October 2014. Loch Affric. I camped overnight near the shore of the loch with the hope of a colourful sunrise reflected in the loch. The rain came in overnight and the morning dawned grey and wet! During my walk back, I did however, photograph Windswept Tree, Loch Affric.

November 2014. Summit of Swinesback, Kinder Scout. The forecast of a clear cold night with a morning of mist, meant I was hopeful for an interesting dawn. The reality was a sleepless night listening to a howling wind and blanket fog in the morning!

January 2015. Latrigg in the Lake District

May 2015. Summit of Chrome Hill in the peaks. A very wet and windy night comparable to my night on swinesback. The morning brought hail and rain. Weather forecasters have a lot to answer for!

June 2015. 2 further camps on Chrome before I experienced the conditions I needed